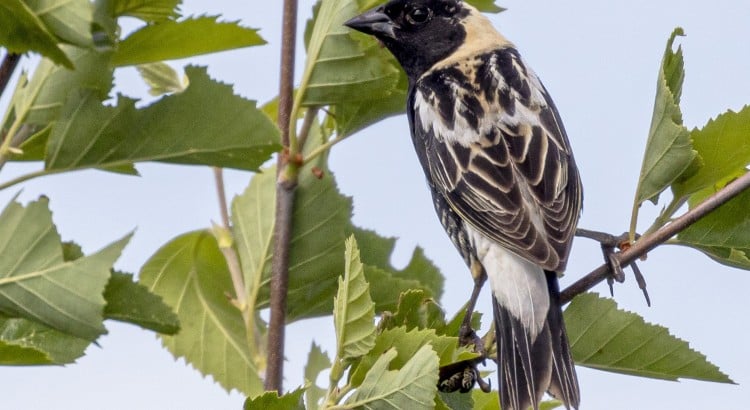 As the summer comes to an end, so does our Farmland Birds program. This program is a partnership with the provincial department of Environment, Energy and Climate Action, as well as the federal program for Species at Risk Partnerships on Agricultural Lands.

This summer our Farmland Birds team started surveying for the presence of bobolink on May 18th after seeing reports of the first males arriving on the 14th. Males were the first to arrive after their long migration (up to 20 000km!) from southern South America. This migration is one of the longest in the world. Upon arrival, males can be seen and heard establishing their territories through song and chasing away competing males. Approximately a week later, females began to arrive and we started to see the tell-tale signs of breeding: courtship displays, pairs forming, and adults carrying nesting material.

Through June, we started monitoring a smaller set of fields more frequently for bobolink reproductive effort. After finding a mate, males are no longer calling as frequently. The new parents are settling into “home life”, buildings nests, incubating eggs and feeding newly hatched chicks! Incubation takes 11-14 days before the eggs hatch. If you watch hay fields closely around this time, you may catch a glimpse of adults carrying food back to their young! It takes another 8-14 days before chicks fledge. During this time, fledglings are gaining independence and learning how to fly.

July 15th is the last day for the delayed hay program, and it is shortly before this time that we began seeing a decline of bobolink in the fields we were monitoring, indicating that they had left the fields. It is hypothesized that during this time, bobolink congregate in wetlands to fatten up before they migrate south again. Males also began molting from their breeding plumage to resemble females and juveniles, and no longer sang their territorial songs. Bobolink young have fledged and become independent from their parents, thus concluding the 2022 breeding season.

Through August we continued monitoring a hand full of fields that had yet to be cut and found large numbers of bobolink congregating in them. Sometimes up to 70+ individuals! It was quite the sight to see. As August has ended, even these flocks have dwindled in numbers, and we believe they are finally migrating south. Bobolink navigate their migration using bristles containing iron oxide inside their nasal cavity. These bristles act as an internal compass and allow them to orient themselves with the Earth’s magnetic fields.

*Please note these are preliminary numbers and could appear different in our final report. *

We would like to thank all our program participants who voluntarily delayed cutting their hay this year and thus allowing us the opportunity to monitor bobolink presence and reproductive efforts in their fields!

Be the first to know about
future events, news and
campaigns.